On a high after beating the United States, Australia’s basketballers head to the Fiba World Cup hoping to make history 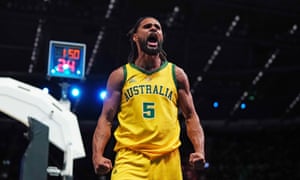 t’s not really about them.” The words of Joe Ingles, mere minutes after his Australian team had overcome international heavyweights the United States in Melbourne on Saturday, were telling. Despite making history by claiming the Boomers’ first-ever victory over Team USA in 55 years of trying, the shooting guard was not getting ahead of himself.

“It is up to us how we go from here – we can keep building or think we’re on top of the world after one win,” he reflected live on television.

As the Australians departed this week for China and the 2019 Fiba World Cup, it was clear that Ingles and his colleagues were keeping their feet firmly on the ground. Triumph over the United States, ending the reigning world and Olympic champions’ 78-game winning streak, may have been a significant moment for Australian basketball. But it will be no salve to the Boomers’ disappointment if they return from China without a medal, which the team has long coveted but never grasped.

Australia has been a powerhouse nation in women’s basketball for some time now. The Opals were world champions in 2006, and have won Olympic silver medals on three occasions. But despite sharing the same talent production line, the globally-renowned Australian Institute of Sport basketball program, Australia’s men have failed to reach the same heights. The Boomers have made four Olympic bronze medal matches and lost each time; their best result at the World Cup a quarter-final berth in 1994.

Yet buoyed by a record number of Australians in the NBA – a total of 13 in the 2018/19 season – the men appear on the cusp of international success. After decades of falling short against dominant North American and European sides at world championships and Olympics, the Boomers’ win over Team USA on Saturday was a statement of intent.

Not that glory in China will be easy. Missing from coach Andrej Lemanis’s squad are a host of NBA heavyweights: Ben Simmons, Dante Exum, Thon Maker, Ryan Broekhoff and Jonah Bolden are all absent for a mix of personal and professional reasons. Simmons is easily the biggest loss, as the most talented male basketballer Australia has ever produced.

The depleted Boomers’ must also navigate a treacherous ‘group of death’ if they are to have any hope of securing a medal. Australia’s tournament commences in Dongguan on Sunday against Canada. The teams lined up against each other twice in August, with the Canadians getting the better of the first encounter before Australia rallied to take the second. Their third match-up in three weeks will set the tone for both nations’ World Cup campaigns.

The Boomers then face Senegal, the lowest-ranked team in Group H but a nation returning to international prominence. The Lions made the final of seven consecutive African championships in the 1960s and 1970s, and while they have not yet regained that clout, the current team won bronze in the 2017 edition. If the Australians triumph over Canada, a subsequent victory against Senegal would all-but secure their progression to the next stage of the tournament. If they leave the first match empty handed, Senegal will pose a stern test as the Boomers fight to remain in contention. 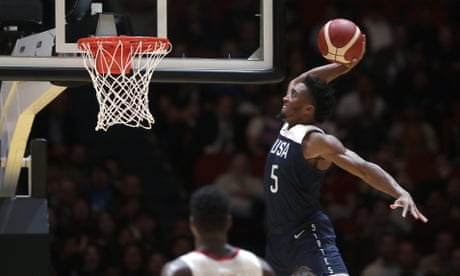 The group stage concludes two days later, with a match-up against Lithuania. At sixth in the world rankings, the Baltic nation are the favourites of Group H (the Australians currently sit in 11th). But the Boomers have enjoyed an edge over the three-time European champions in recent years, beating them at the 2014 World Cup and 2016 Olympics.

Although the draw may pose a serious challenge, and there is every possibility Australia could end up in the placement games fighting for 17th to 32nd rather than challenging for a medal, there is one silver lining. If the Boomers conclude the initial stage in first or second, and secure wins against the two best-placed of their group G opponents (Dominican Republic, France, Germany, Jordan) in the second round, they will avoid the United States until a possible gold medal clash.

With a tough group and plenty of stars missing, it would be understandable if the Australians fail to end their long search for international success in China. The 2020 Olympics in Tokyo might represent a more realistic opportunity to break the medal drought. But Boomers assistant coach Adam Caporn insists the team is not looking for pre-emptory excuses.

“The goal is gold – to make history and secure our first medal,” he said. For Ingles, Caporn and the remainder of this tight-knit Australian squad, that’s what it’s all about.

As Team USA prepare to represent their country at the Fiba World Cup, their coach, Gregg Popovich, has given his thoughts on patriotism...

Ezekiel Elliott’s holdout wasn’t a topic when Jason Garrett addressed the Dallas Cowboys for the first time at training camp in...