Photographer Valentin Jeck has travelled around the region of former Yugoslavia to capture images of its brutalist architecture for MoMA’s Toward a Concrete Utopia exhibition.

Jeck’s series of images are blown up and displayed around the galleries of the New York museum as part of the exhibition, which opened to the public yesterday, 15 July 2018. 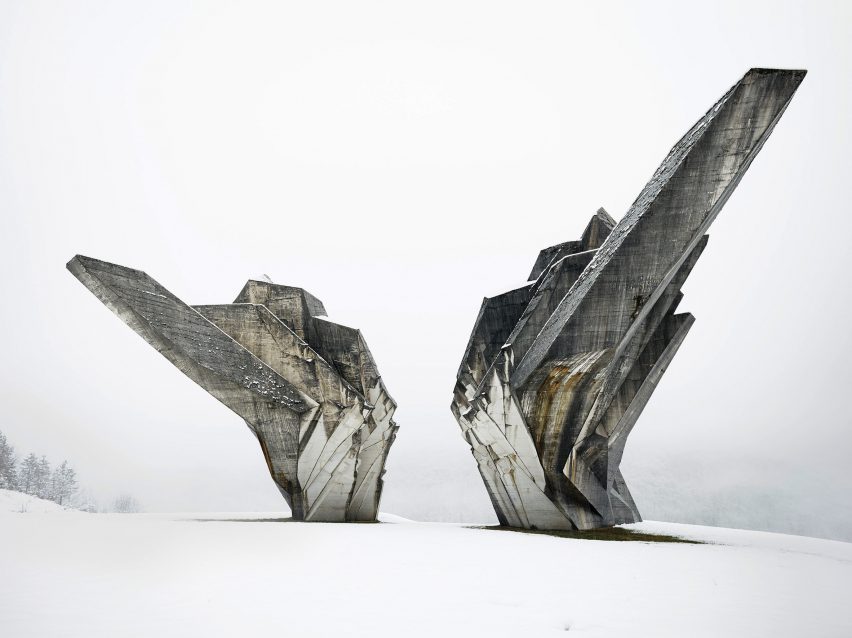 Valentin Jeck’s photos for Toward a Concrete Utopia include Miodrag Živković’s Monument to the Battle of the Sutjeska in Bosnia and Herzegovina, 1965-71

Titled Toward a Concrete Utopia: Architecture of Yugoslavia, 1948-1980, it presents the buildings designed to shape a national identity during the socialist country’s formative years.

Jeck was commissioned by MoMA to take photos of the most impressive examples of architecture from the period, many of which were built from concrete in an expressive brutalist style. 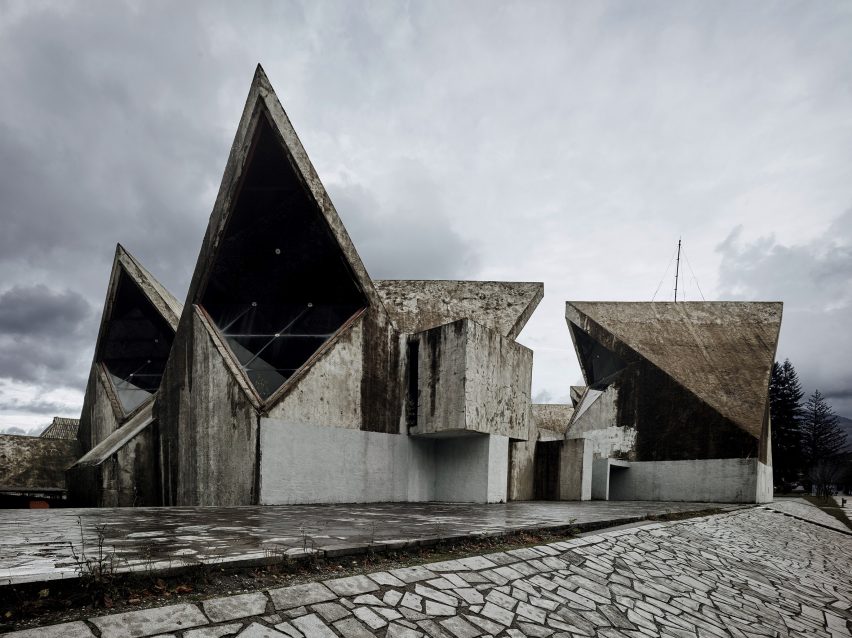 The exhibition includes examples of brutalist architecture from across the region, like Marko Mušič’s Memorial and Cultural Center and Town Hall in Montenegro, 1969-75

The Swiss-based photographer, who has plenty of experience capturing these types of buildings, was given free reign on the project.

“I had no specific brief,” he told Dezeen. “I was completely free to choose the style and the look. They gave me a list of the relevant buildings and monuments, and the contacts of the individuals at the sites.” 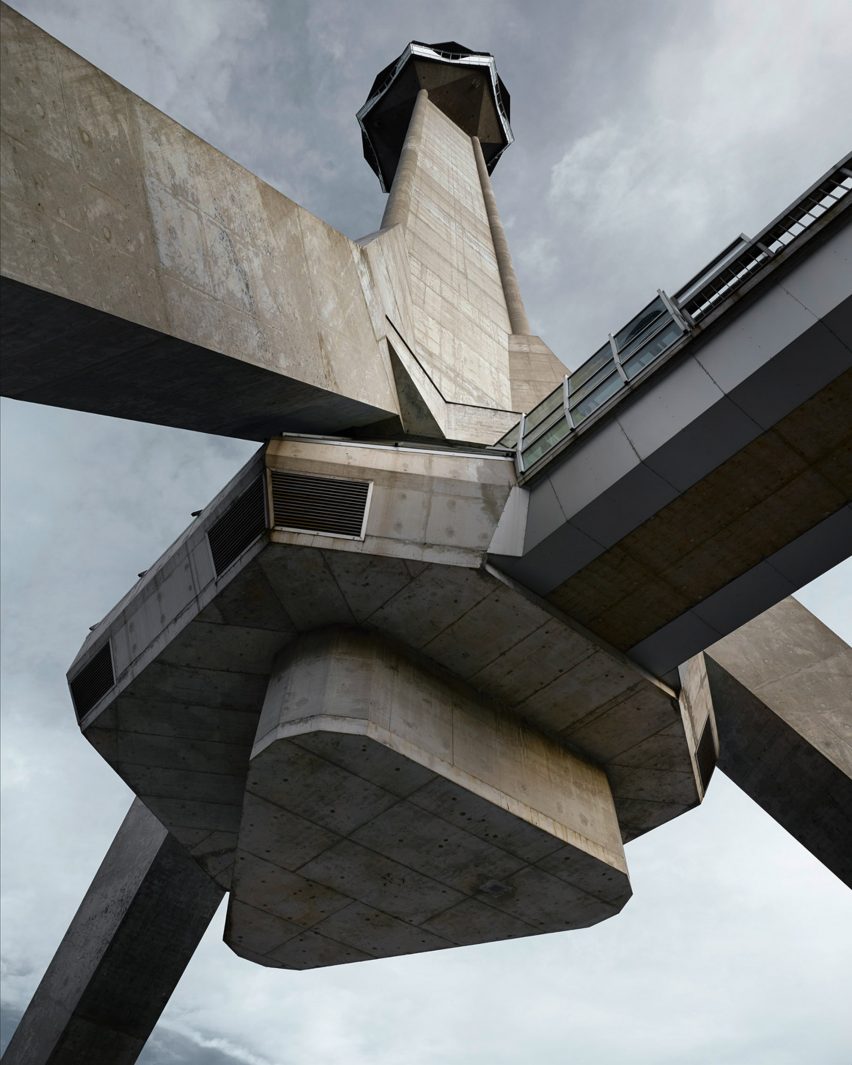 The Avala TV Tower by Uglješa Bogunović, Slobodan Janjić, and Milan Krstić was completed in 1965, but destroyed by bombing in 1999 and rebuilt in 2010

Over the past two years, he made seven separate trips to the countries of former Yugoslavia, which include Croatia, Serbia, Slovenia, Bosnia and Herzegovina, Macedonia, Montenegro, and the still-disputed territory of Kosovo.

“I was well-accompanied by local advisors who were also involved in the exhibition,” said Jeck. “Normally there was no problem, except at those with military relevance.” 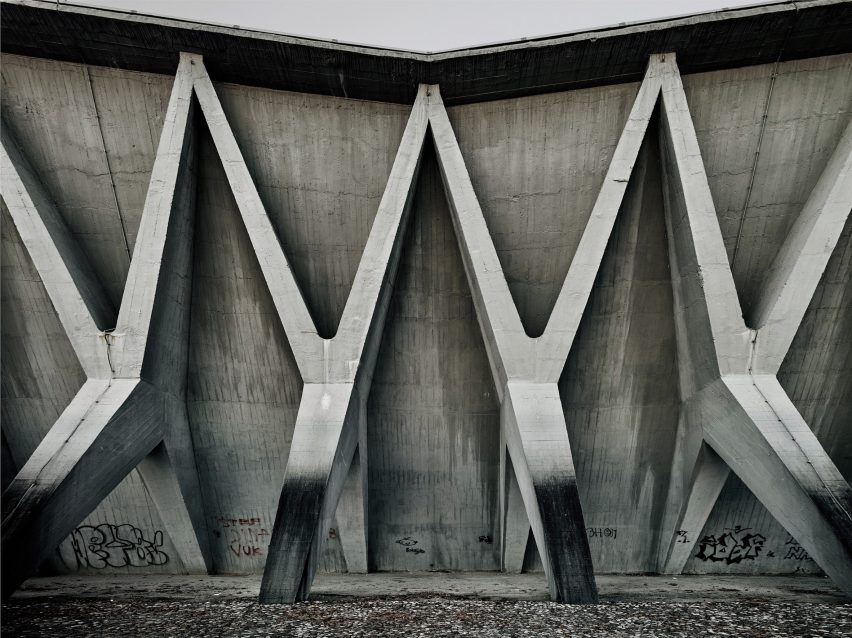 The style developed in Yugoslavia involved expressive concrete forms, as seen in Ivan Vitić and Krunoslav Tonković’s Pavilion of West Germany, created for the Zagreb Fair in 1957

During his visits, he found many of the structures in poor repair, as seen in some of the images where scaffolding is erected and landscaping is overgrown around them. But the aged and weathered concrete made for more interesting imagery, Jeck said.

“The raw concrete structures are very photogenic,” he said. “I like the patina, especially the fact that they’re not restored and in their original condition.” 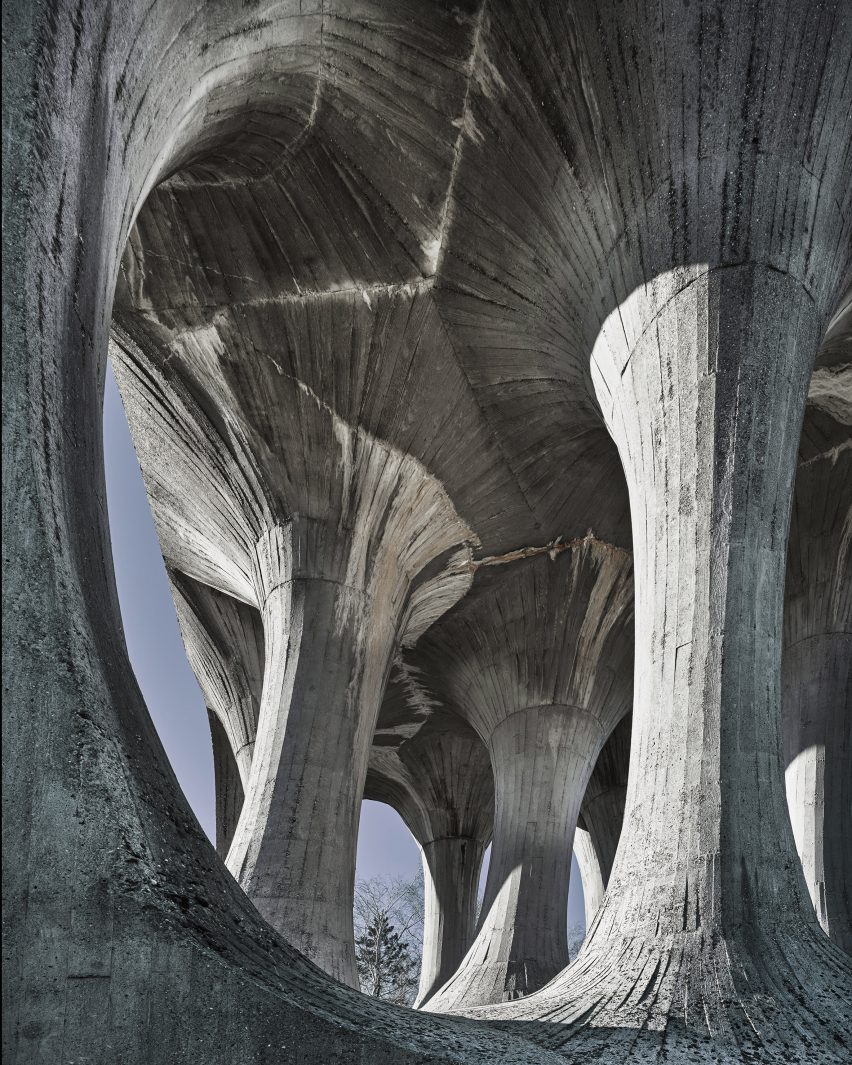 Monuments built to commemorate the second world war, including this structure designed by Živa Baraga and Janez Lenassi in Slovenia, sprung up across the region

Jeck produced hundreds of photos for the exhibition, which were whittled down to the final selection by the MoMA curators.

The featured buildings and monuments include Belgrade’s 205-metre-tall Avala TV Tower, which was originally built in 1965 but destroyed during NATO’s bombing of the city during the Yugoslav wars in 1999. It was later reconstructed, and reopened in 2010. 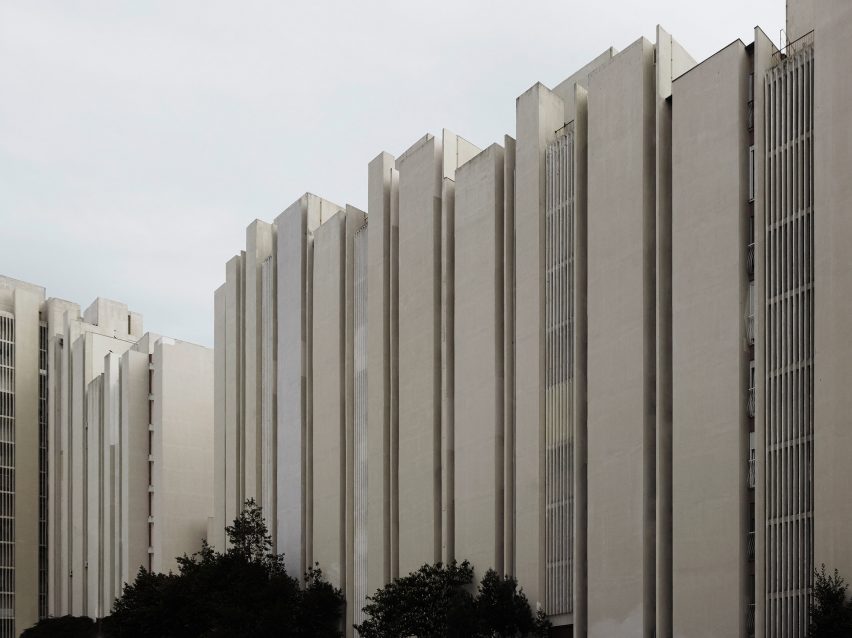 The socialist country wanted to express its ideals through architecture, and built housing like this block by Dinko Kovačić and Mihajlo Zorić in Spilt

Among other highlights are the Monument to the Battle of Sutjeska – one of many structures built across the region to commemorate those who died during the second world war. Shown in the snow, the monument comprises a pair of structures that look like huge chunks of carved rock and are shaped to splay away from one another.

A telecommunications centre in Skopje, social housing in Spilt, a library in Pristina and an office tower in Ljubljana are also on show as part of the series. 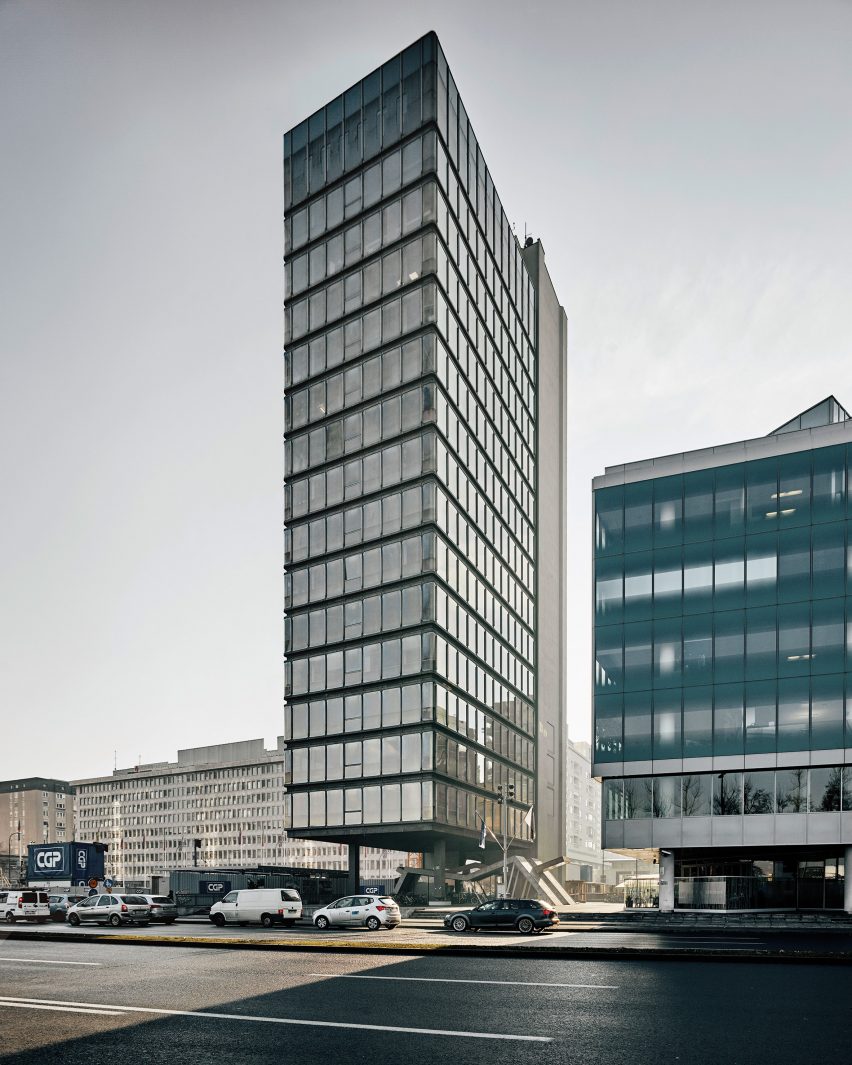 The wave of construction also included projects for private clients, like this 1978 office tower in Ljubljana by Milan Mihelič

Jeck said that by undertaking the assignment, he gained a better understanding and developed a greater admiration for the buildings.

“The designs of the 1950s and 1960s are very interesting to me,” he said. “The longer I worked on [the project] the more I appreciated the work.” 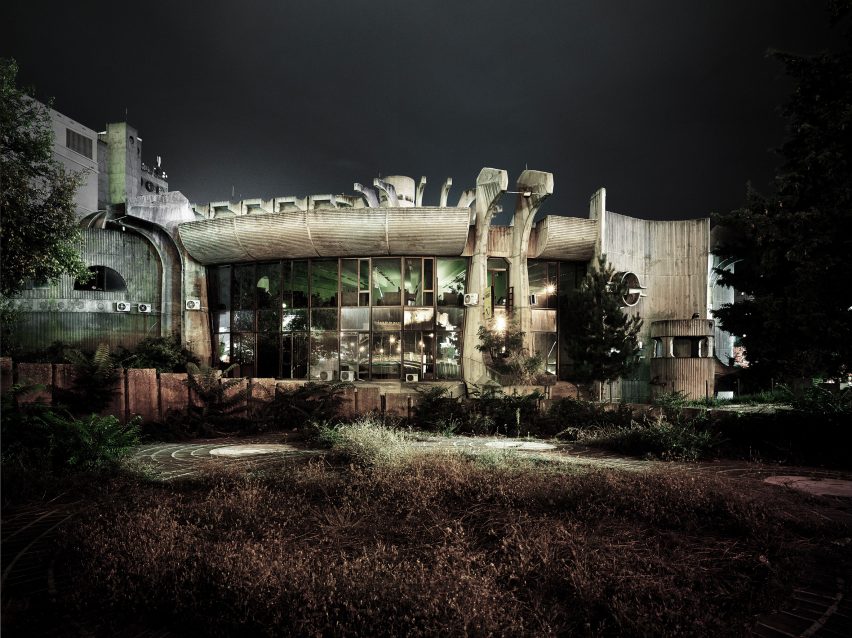 Jeck found many of his subjects in disrepair, such as the Telecommunications Center designed by Janko Konstantinov in Skopje, 1968-81

Toward a Concrete Utopia is on show in MoMA’s third-floor Robert Menschel Galleries until 13 January 2019. All photographs are by Valentin Jeck, commissioned by The Museum of Modern Art.

Mexican studio AE Arquitectos has built a gabled stable from volcanic rock for a community ranch in Jalisco. The ranch is designed with...

House in Yangsan looks like a cluster of small houses

Architecture studio Raum designed this house in the South Korean city of Yangsan as a cluster of clean-lined, interconnected blocks that...

Rammed earth and glass form the walls of this house by US studio Feldman Architecture, which was designed for a hilly property in an...

Creating enough space for long dinners with friends was a top priority for Note Design Studio when designing the interiors of this block...